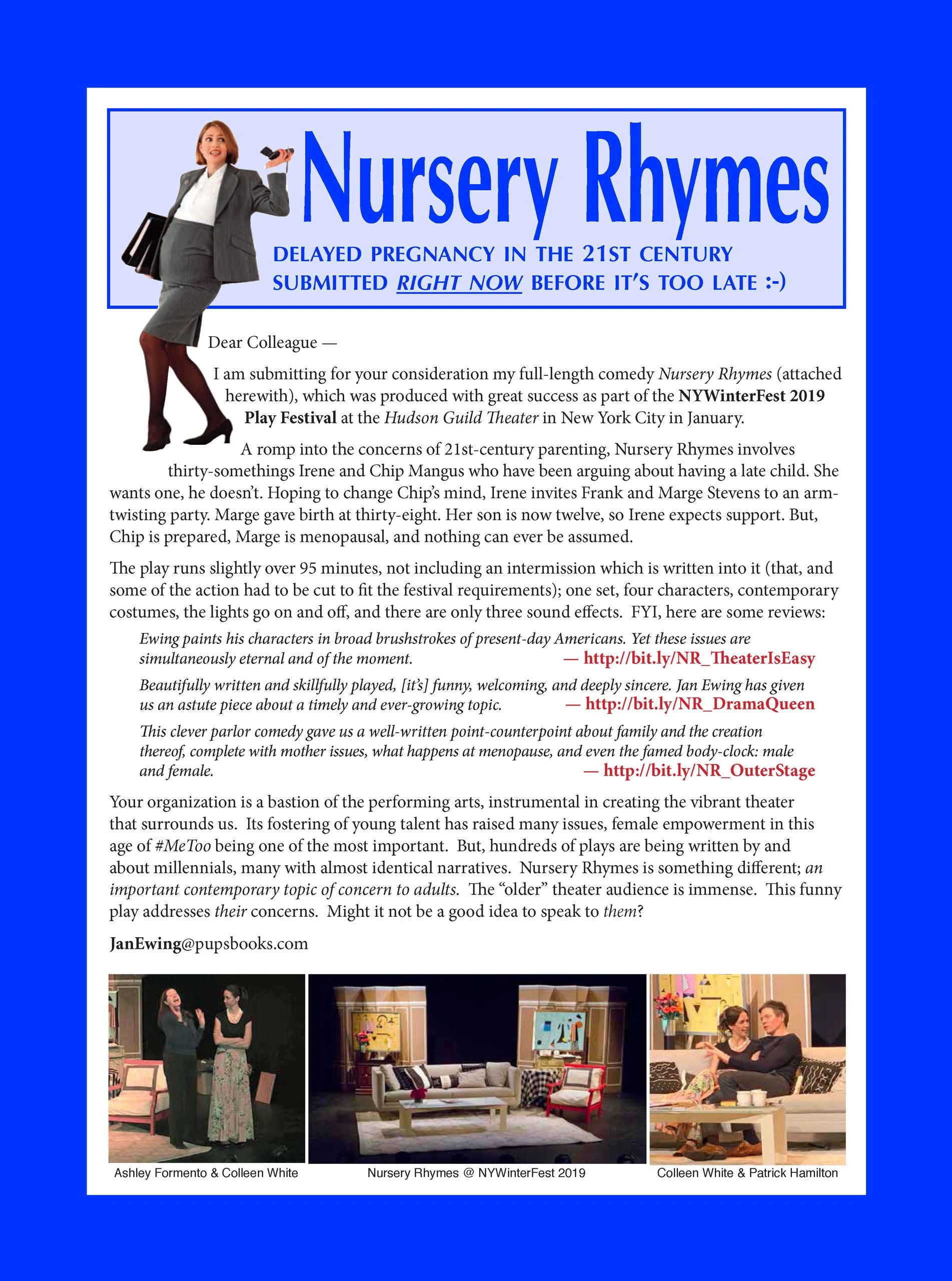 NYWinterFest 2019 at The Hudson Guild Theater

ON OLDER WOMEN AND PREGNANCY

For the first half of Jan’s life he was a performing artist. As a young man, he actively pursued a career as a stage- and music-directer with some considerable success. During that time, he wrote a play called Nursery Rhymes. Everyone loved it, but getting anything onto a New York stage is difficult, and as time went on he was seduced by computers and other things took precedence. He went into desktop publishing in 1984, which turned out to be profitable, and created text and reference books for almost every major publisher in NYC until retirement in 2014.

Then, while looking around for something to do, Jan was asked by Eva Heinemann, founder of the HI! DRAMA website, to write a review of “Ruddigore” by Gilbert and Sullivan, which was being presented by The New York Gilbert and Sullivan Players. That led to a joyous round of seeing and reviewing some wonderful plays (EWING REVIEWING) which drew him back into the theater and ultimately led to the submission and acceptance of Nursery Rhymes for the prestigious NYWinterFest 2019 Play Competition in January. If all goes well, it will be seen by the movers and shakers of NY theater, and a substantial Off-Broadway production is not out of the question.

Since midsummer, when we learned of the acceptance at WinterFest, we have been raising funds on GoFundMe. Thank you to the many friends who supported us in launching our project.

Next, in October/November, Jan huddled with his stage manager, Tamara Knezevic; and his set designer, Michael Mitchell. Plans were made, and in December thoughts turned to casting. With Skype and the Internet, Jan found the process cheaper and more human than what he remembered. In two weeks, Jan had found the perfect four: Colleen White as Irene, Patrick Hamilton as Chip, J Michael Baran as Frank, and Ashley Formento as Marge. Rehearsals have just begun. (12/16)

As most of you know, Pupsbooks is an informal, unfunded writing collective for the work of life-partners, Jan Ewing and William Cataldi. We hope you will explore this website, you may find you are interested in our work. Thank you.

For months, 30-somethings Irene and Chip Mangus have been arguing about having a late child. She wants one, he doesn’t. Looking for help, Irene invites an older couple, Frank and Marge Stevens, to an arm-twisting party. Marge gave birth at thirty-eight—her son is now twelve—so Irene expects support. But, Chip is prepared, Marge is menopausal, and one should never assume anything.